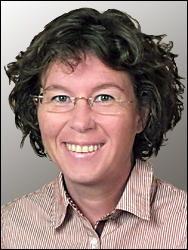 Sabine's main research interest is physics beyond the standard model, with a special emphasis on the phenomenology of quantum gravity. This still young research field brings together experimentalists and theorists and connects many different areas, from cosmology and astrophysics over neutrino physics to particle colliders and high precision measurements. Her contributions are focused on the role of Lorentz-invariance and locality, which might be altered in the fundamental to-be-found theory of quantum gravity and be accessible to experiment.

Sabine has collaborators at Perimeter Institute in Canada, at the University of Sussex, at SISSA in Trieste, and the MPI in Potsdam, Germany. At Nordita, she has organized a workshop on "Experimental Search for Quantum Gravity" in summer 2010 that was well attended by Nordic and international participants.