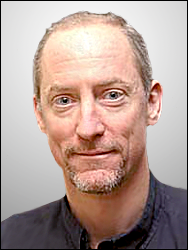 John S. Wettlaufer is the A.M. Bateman Professor of Geophysics, Physics and Applied Mathematics at Yale University. His training is in the statistical physics of phase transitions but over the years it has branched out substantially across many disciplines in soft condensed matter physics and applied mathematics with impinging upon biophysics, geophysics and most recently, due to his time here previously, astrophysics.

His stay at Nordita in the fall of 2011 is supported by the Wenner-Gren Foundation, and he has been awarded the Tage Erlander Guest Professorship for 2012. The holder of this chair is appointed by invitation from the Swedish Research Council.

John will be working on the stochastic dynamics generally with applications to abrupt changes in Arctic climate and in fluid dynamics generally. In the former case, the basic problem is one of predicting the future using imperfect and highly variable global climate computer models versus the questionable activity of extrapolating to the future using a 31 year time series of high resolution satellite data. This leaves a spate of possibilities for "simple" mathematical models, rigorous studies of the origin and nature of variability and periodicity, and a focus on the multiplicity of time scales embedded in the data, examined in the context of the singularity spectrum of multifractals. These approaches have an origin in the statistical mechanics of fluctuating systems with major insights originating in stochastic and numerical models of turbulence, dynamos and a wide variety of other systems. He hopes also to begin the process of incorporating the microphysical conditions for planetary accretion studied during his previous visit into the pencil code.